The world’s population presently experiences a period of unprecedented growth, increasing the need to further intensify agricultural production. At the same time, recent climate models predict shifting global precipitation patterns. Incidences and duration of drought periods will increase in many regions of the world, threatening agricultural productivity. Enhancing the water-use efficiency (WUE) of agricultural cropping systems is therefore a major research objective in water-limited environments. Generally, WUE is defined as the ratio of assimilated carbon to the amount of water lost by (evapo)transpiration and can be defined on the level of single leaves (WUEL), individual plants (WUEP), entire canopies (WUEEco) or, from an agronomic perspective, based on the harvested yield (WUEYield). Potassium (K), as one of the major mineral plant nutrients, is crucially involved in plant-water-relations and has the potential to enhance WUE. The impact of the amount of K that is available in the growth medium on crop WUE can substantially differ with respect to the spatiotemporal scale of its integration. In his Ph.D. project, Bálint Jákli studied this multi-scale aspect and evaluated leaf to field scale WUE with respect to K nutrition. Particular focus was on the role of K in maintaining photosynthetic carbon assimilation.

WUEL was calculated from photosynthetic leaf gas exchange under greenhouse and field conditions or expressed as δ13C from the ratio of stable carbon isotopes in the dry matter of crops. WUEP was calculated only for pot experiments as the ratio of dry matter accumulated to the amount of water used during the period of crop growth. Water use was therefore measured by continuous automated weighing of the pots. In field experiments, WUEEco was calculated from canopy gas exchange, which was measured using a mobile non-steady-state chamber system. Furthermore, WUEYield was determined by relating total biomass production or harvest yield to the amount of water lost from crop stands by evapotranspiration during the growing season.

Adequate K supply enhanced WUEP of wheat (Triticum aestivum L. var. Sonett) and sunflower (Helianthus annuus L. var. Pacino) grown in nutrient solution up to 30% and additionally up to 20% under water deficit conditions (induced by addition of PEG 6000 to nutrient solutions), but had no effect on WUEL.

Research on the limitation of photosynthetic CO2 assimilation under potassium deficiency

A quantitative limitation analysis of photosynthetic CO2 assimilation revealed that stomatal functioning was maintained under K deficiency and that, if water availability was not limiting, stomatal conductance was adjusted to meet the CO2 demand of photosynthesis. The major limitation to assimilation was posed by CO2 diffusion through the leaf mesophyll, which was drastically impaired in leaves of K deficient sunflower. On the field scale, K fertilization, relative to long-term omitted K fertilization, did not significantly alter net ecosystem exchange of CO2, evapotranspiration and instantaneous WUEEco of sugar beet (Beta vulgaris L. var. Hannibal). However, K fertilization enhanced white sugar yield and therefore time-integrated WUEYield.

Major conclusions drawn from this project are that K deficiency triggers a reduction of mesophyll conductance to CO2, most likely due to changes in leaf anatomy, which negatively affects carbon assimilation and causes the typical symptoms like oxidative stress, growth inhibition and reduced WUEP. Differences between WUEL and WUEP arise from the fact that, in addition to photosynthetic leaf gas exchange, WUEP also integrates water lost by transpiration during the night as well as dark respiration and root respiration. These factors can be substantially affected by K nutrition. Hence, leaf scale evaluations of WUE are not reliable in predicting WUE of crops suffering K deficiency on larger scales.

It is finally concluded that WUE is determined by a vast number of interlinked (eco)physiological processes. K nutrition is only one of the many factors that can affect WUE and its potential to enhance the WUE of crop plants strongly depends on the scale of spatiotemporal integration.

Bálint Jákli successfully graduated in November 2016 and published his Ph.D. thesis, entitled “The relation between potassium nutrition and water-use efficiency of crop plants – Comparative studies from leaf to field scale”, in December 2016. 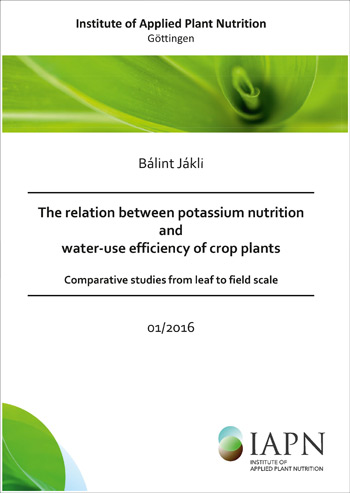 The dissertation of Bálint Jákli is published by Cuvillier-Verlag and can be ordered on their website. Go to the publishers page.