The world’s climate is currently undergoing an era of rapid change, characterized by increased average temperatures and shifting precipitation patterns. Based on modelled predictions, there is an increasing risk of extreme drought incidences in many regions. Agriculture as the biggest consumer of water on this planet is therefore at high risk of losing productivity. The latter indicates that current agricultural practices are obliged to improve in order to keep up with the food demand in the future.

Studies show that plants try to cope with drought stress conditions by adjusting transpiration and simultaneously optimizing their carbon assimilation rates. In this context, the availability of nutrients to the plants is decisive for their performance. One of the necessary nutrients, which aids the osmoregulation in plants, is potassium (K). K is the most abundant cation in plants that plays a crucial role in stomata conductance, water use efficiency (WUE) and assimilate translocation. However, physiological mechanisms underlying plant drought tolerance and improvement of water use efficiency (WUE) by sufficient K supply are not completely understood. It is also known that there is high risk of photo-oxidation damage under drought stress initiated by toxic reactive oxygen species (ROS) which is mitigated by adequate K supply. However, the extent to which K supply can suppress ROS damage under drought stress is limitedly studied.

In this context, the aim of the PhD study performed by Ershad Tavakol was to investigate the role of K supply on avoidance and defense measures taken by the plants to overcome drought stress and to elucidate these mechanisms from a molecular perspective. Additionally, his studied covered the role of K supply on plant growth characteristics. To this end, he applied multiple approaches comprised of studying plant water relations, ROS and antioxidant measurements and whole genome transcriptional profiling.

The results showed that low K supply reduces dry matter (DM) by 53% and 66% in cv. Milford and Sahin-91 respectively, while drought induced PEG caused 47-51% reduction in DM of the respective cultivars. Overall, biomass-WUE under low K supply decreased significantly in both barley cultivars, being more pronounced under osmotic stress treatment. However, the experiment clearly showed that leaf-WUE was not affected by K supply. The study showed that leaf K content and ABA concentration were negatively correlated. ABA concentration was also negatively correlated with both leaf- and whole plant transpiration rates. This indicated that under osmotic stress conditions, potassium limitation increases ABA content and eventuates in reduced stomatal conductance and whole plant transpiration. H2O2 and O2- concentrations rose to 1.4 and 4.3 folds under low K supply respectively. However, limited antioxidant activity was observed under the latter conditions. Under PEG induced drought, there was a slight increase in antioxidant activity, nevertheless when PEG was combined with K deficient pots (low K +PEG), considerable augmentation of antioxidant activity was observed. This indicated that K supply under osmotic stress mitigates ROS damage mainly by avoiding its generation rather than improvement of antioxidant activity.

The whole genome transcriptional response showed that a considerable amount of entities were significantly up/down regulated under different K and PEG treatments. The highest amount of differentially expressed genes compared to control conditions (nearly 4000 entities) occurred under multiple stress (low k +PEG) conditions, which was nearly 3-4 times of the other two treatments (1-low K supply, 2-adequate K supply with PEG induced drought). This indicated that under osmotic stress, the deficiency of potassium causes severe stress to the plants and in order to survive, they have to suffer highest physiological changes compared to control conditions.

Expression of genes related to ABA biosynthesis and response to ABA under low potassium supply was negatively affected. In contrast, under osmotic stress conditions, a considerable upregulation in ABA biosynthesis was observed. Here, the expression of genes related to the light reactions of photosynthesis reduced proportionally according to the level of stress, being more affected by low K supply compared to sufficient K supplied plants. Therefore, it was suggested that under osmotic stress conditions, when plants are trying to avoid ROS production by avoiding energy absorption, optimized K supply allows them to absorb more light energy and properly consume it through improved photosynthesis. This eventuates in reduced ROS production under the latter conditions.

Overall, based on the results of the studies performed by Ershad Tavakol, he concluded that low biomass WUE under low K supply is not due to inefficient water loss through the stomata, but rather due to energy consumption for secondary compounds production. It was also hypothesized that increased respiration as well as changes in the leaf morphology could account for the reduced WUE under low K supply treatment. Additionally, it was concluded that under osmotic stress, switching low K supply to high K supply causes the plants to switch from a surviving strategy which is highly energy inefficient to a resistant strategy being highly energy efficient and aiding them in photosynthetic performance leading to limited yield losses. 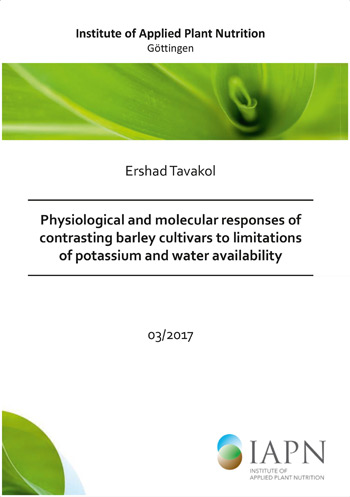 The dissertation of Ershad Tavakol is published by Cuvillier-Verlag and can be ordered on their website. Go to the publishers page.