IMPAC3 (Novel genotypes for mixed cropping allow for improved sustainable land use across arable land, grassland and woodland), a project supported by the Federal Ministry of Education and Research, has been nominated for the German Sustainability Award 2019 in the Research category. According to a verdict of an expert jury, IMPAC3 is one of three finalists.

Public online-voting (https://www.nachhaltigkeitspreis.de/wettbewerbe/forschung/) will decide which of these projects will receive the award; online-voting will be possible until 16 November. In the meantime, the Research-category finalists will be televised on “nano”, 3sat’s science program. The scheduled broadcasting date for IMPAC3 is 7 November 2018, 6:30 pm.

Member of the IMPAC3-team: Annika Lingner, research associate at the IAPN In this project, IAPN research associate Annika Lingner, together with researchers from ten other institutes at the University of Göttingen, has been investigating the question of how mixed cropping can improve biodiversity and land use efficiency. Within the scope of IMPAC3, Annika Lingner’s research focused on water and nutrient uptake of both mixed stands and monocultures in field crops and grassland.

An extract of the jury statement on the nomination of IMPAC3: “Research and breeding of varieties suited for mixed cropping have so far received only little attention. It is therefore totally unknown which varieties will turn out to be appropriate, and which traits need to be considered for breeding. IMPAC3’s innovative research approach primarily focuses on the connection between ecology and production technology, thereby creating the foundation for breeding new plant species that are especially productive, resource-efficient and resilient.”

Award winner to be announced on 7 December 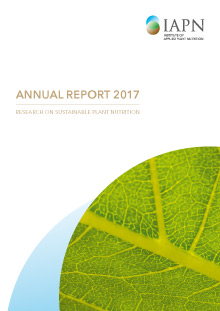 Project presentation on the website of the University of Göttingen

Project presentation on the website of the German Sustainability Award