One year has now passed since the IAPN premises were inaugurated. A lot has happened since then. Young scientists have moved into the offices, labs have been equipped with state-of-the-art technology and glasshouses are now green with sprouting test plants. 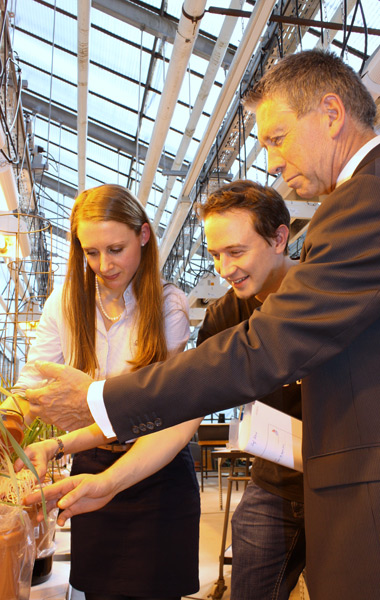 An effective partnership: staff members of the IAPN, the Division of Plant Nutrition and Crop Physiology at the University of Göttingen, and K+S KALI GmbH, at their meeting in Göttingen on 15 April 2013. (Photo: Dach)

“Last June we were successful in appointing Dr. Mehmet Senbayram as Junior Professor”, reported Prof. Dr. Klaus Dittert, Director of the IAPN. “The development of a group of new scientists is in full swing: three Ph.D. students have commenced their research projects. We are confident that soon we’ll be looking at some very interesting scientific results.”

Prof. Dittert was commentating during the meeting of key representatives of both sides of the research partnership, on 15 April 2013 in Göttingen. The meeting was the latest element of a continuous and productive exchange of knowledge between the IAPN and the Applied Research and Advisory Department of K+S KALI GmbH. The latter was represented by their director, Prof. Andreas Gransee, who was joined by Dr. Ernst Andres, member of K+S KALI GmbH’s Board of Management, and Dr. Beate Deuker from the Department of Corporate Communication, who had travelled to Göttingen in order to get to know the IAPN at first-hand. The event was also a source of new and valuable insights for staff members of the Division of Plant Nutrition and Crop Physiology, with which the IAPN is associated. 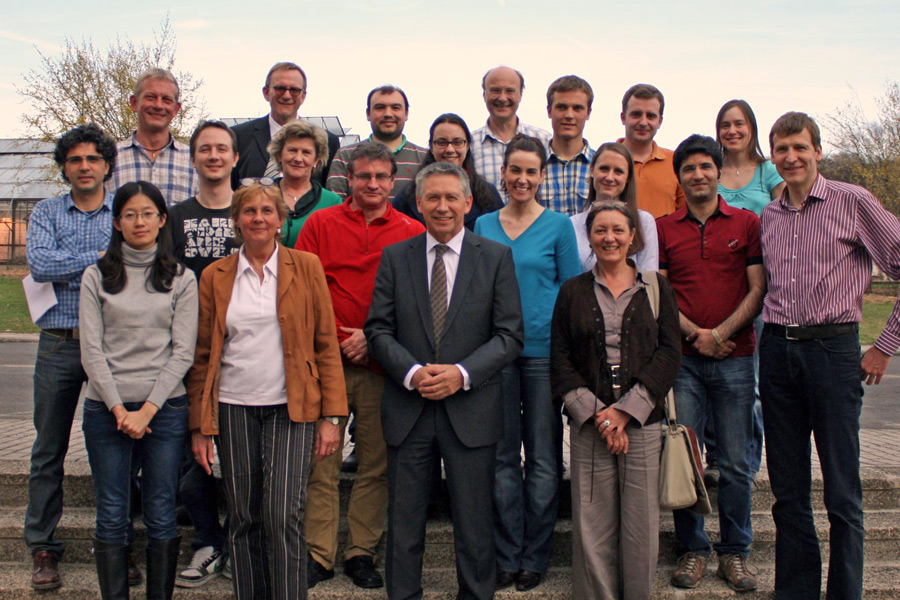 An effective partnership: staff members of the IAPN, the Division of Plant Nutrition and Crop Physiology at the University of Göttingen, and K+S KALI GmbH, at their meeting in Göttingen on 15 April 2013. (Photo: Dach)

During a tour of the IAPN, Prof. Senbayram presented the new laboratory equipment and gave some insights into the analytical options that they provide. “During the past few months we have placed particular emphasis on equipping the gas-exchange measurement area”, he explained. “It will be essential for us to precisely gauge stress reactions of plants over the course of time, from the earliest stages. For this, chlorophyll fluorescence is a particularly valuable indicator”.

After Prof. Senbayram’s presentation the young researchers presented their test arrangements, under the warming glow of the greenhouse lamps. Research into the function of essential plant nutrients for drought stress resistance in crops is a major focus of the IAPN. Pioneering research in this field is being conducted by Merle Tränkner, who has been working at the IAPN since October 2012. In her Ph.D. project she is investigating the influence of nitrogen, magnesium and potassium on water-use efficiency and stress tolerance, using wheat and barley as model plants. 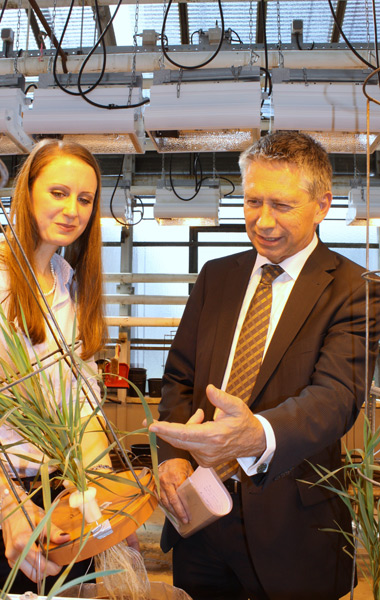 Expert to expert: Merle Tränkner, Ph.D. student at the IAPN, briefs Dr. Ernst Andres, member of K+S KALI GmbH’s Board of Management, on the methodology used in her tests. (Photo: Dach) 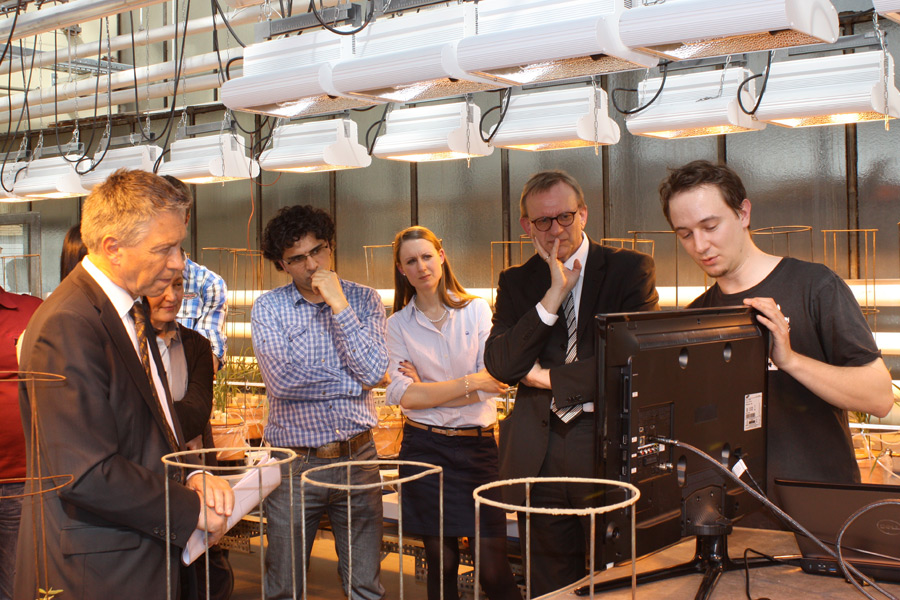 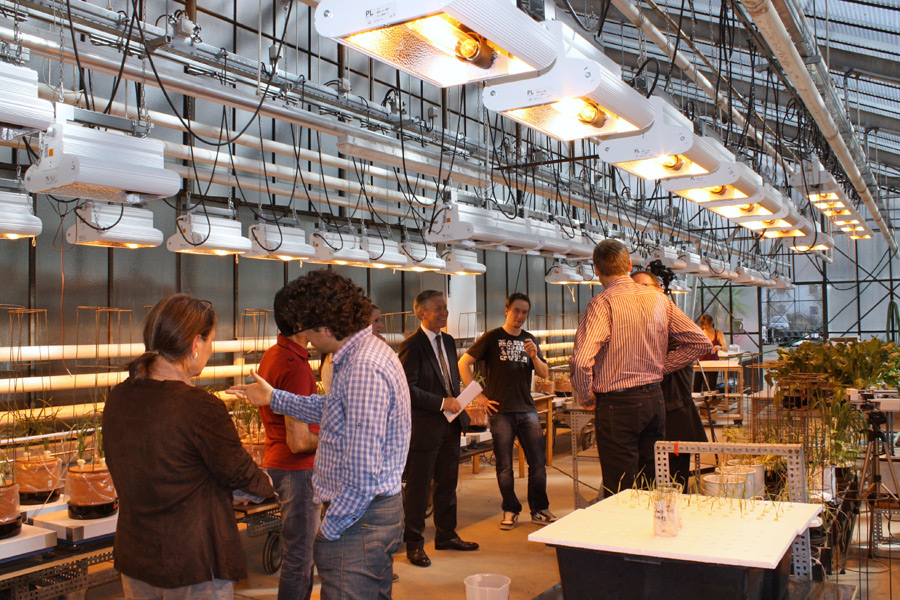 In conversation: staff members of the IAPN and K+S KALI GmbH. (Photo: Dach)

The research project of Ph.D. student Balint Jakli has a similar focus: he is working on the development of remote-sensing methods for site-specific detection of drought stress and nutrient deficiencies in crops. In his project he uses gas exchange measurement and chlorophyll fluorescence, which allow detection of stress indicators such as disruptions of foliar transpiration and of photosynthetic processes long before early stress situations are visible to the human eye or can be detected by other measuring devices.

The team of doctoral students is completed by Ershad Tavakol, who is studying the hormonal regulations of crops under drought conditions and their how these can be modified by adapted mineral nutrition of the plant. His research focuses on the element potassium, the influence of which on the hormonal steering of transpiration and photosynthesis is still largely unknown.

Insights into the world of K+S KALI GmbH

Following the tour of the IAPN facilities, Dr. Andres introduced K+S KALI GmbH and outlined the company’s motivation for being involved in this research partnership. “K+S KALI GmbH is one of the world’s leading manufacturers of potassium and magnesium products. Both nutrients are essential to soil fertility and to the yield formation of crops. They are therefore an important contribution to feeding the world’s population”, said Dr. Andres. He stated that optimal fertilization intensity has clearly not yet been implemented in many regions of the world. “Our research activities support the development of site-specific fertilization systems. And with our worldwide advisory system, K+S KALI GmbH helps to bring existing knowledge on plant nutrition to those who can put it into practice.” 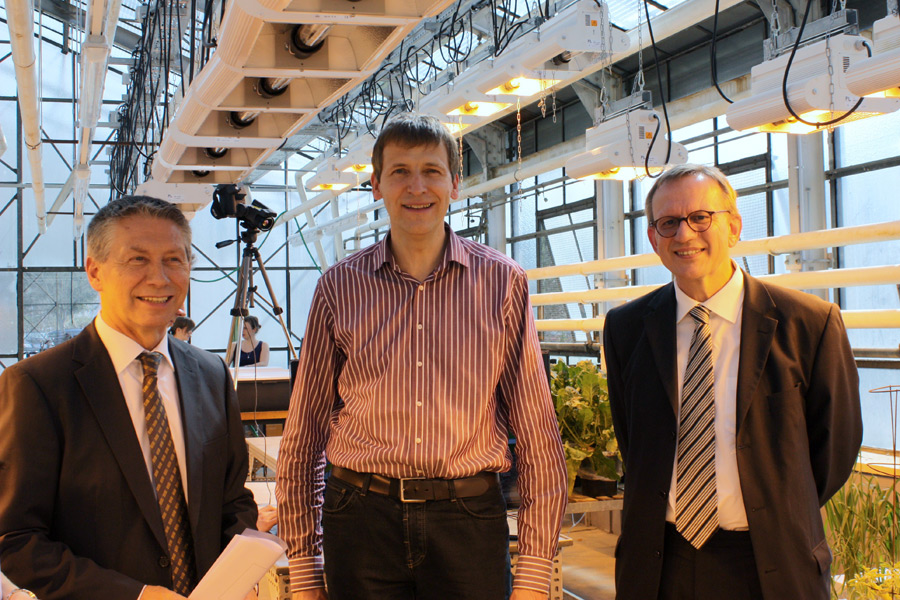 Dr. Andres’s contribution provided the Institute’s employees with new perspectives on the nutrients they research. “Potassium is one of the essential elements of plant nutrition”, said doctoral student Merle Tränkner. “I learned a lot about the worldwide potash market and about the processing steps necessary for creating fertilizers. The wider context of this research partnership has become much clearer.”

“This exchange offered an excellent opportunity to review the work done in recent months”, said Prof. Dittert. “In the midst of the Institute’s day-to-day activities there’s no time to appreciate the great steps we’ve already taken on the way to new scientific findings.”

As the event drew to a close, the participants were unanimous: “To be continued!”