Magnesium (Mg) is often called the “forgotten element” since it is neglected in plant nutrition in many regions. It plays various important roles in plants during their growth and development. Being the center atom of chlorophyll molecule, Mg deficiency induces chlorophyll degradation. It acts as a cofactor modulator for the most important enzyme in photosynthesis, ribulose-1,5-bisphosphate carboxylase/oxygenase (Rubisco). It has been found that under Mg deficiency the activity of Rubisco is reduced. Since Mg is an important element in photosynthetic apparatus, its deficiency affects carbon dioxide (CO2) assimilation and thereby stomatal conductance. 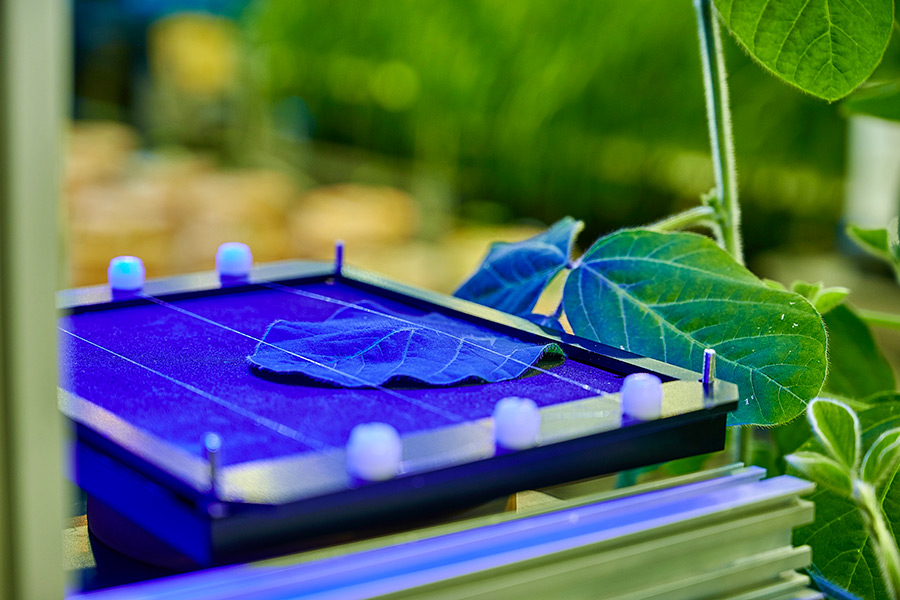 Measurement of chlorophyll fluorescence on a soy bean leaf in order to assess the non-photochemical quenching (NPQ) and photochemical efficiency. In this IAPN experiment, leaves were fully supplied with nutrients, hence they do not show any symptoms of deficiency. (Photo: K+S)

Under Mg deficiency, light energy becomes excessive and is beyond the utilization capacity of the photosynthetic apparatus. In this situation, production of reactive oxygen species (ROS) is increased. ROS are toxic, damage the photosynthetic system and cause cell death.

Plants have developed mechanisms to cope with this excessive energy, which are called "photoprotective" mechanisms. One of the mechanisms is detoxification of ROS via different enzymes. Another mechanism is dissipation of excessive energy as heat, called non-photochemical quenching (NPQ), involving the “xanthophyll cycle”. When within the photosynthetic apparatus the absorption of light increases, the pH inside the thylakoid’s lumen (matrix inside the lumen) decreases and activates an enzyme called “violaxanthin de-epoxidase”. This enzyme converts the pigment violaxanthin to zeaxanthin and thereby initiates the NPQ mechanism. As the light absorption reduces, pH will be increased, and zeaxanthin will be converted back to violaxanthin. 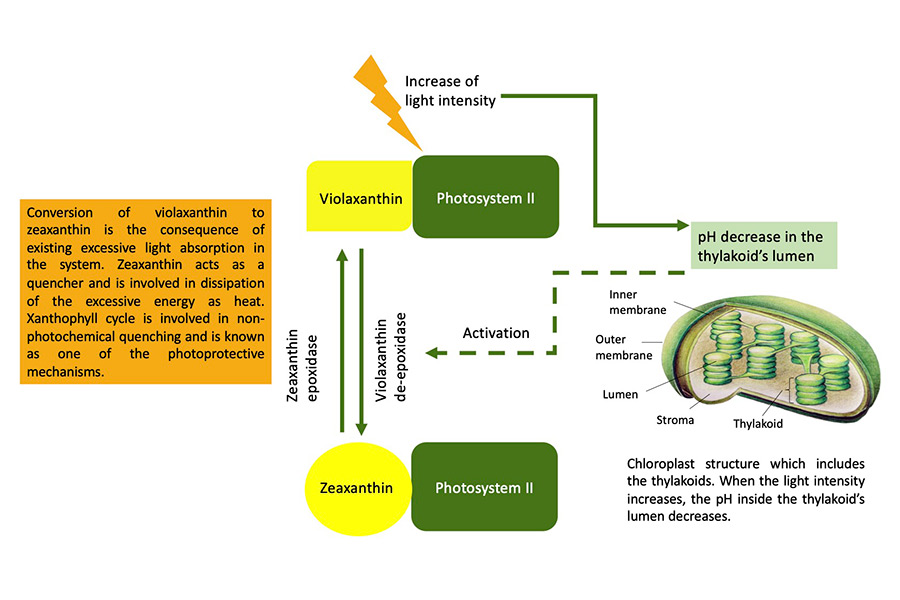 Schematic illustration of the xanthophyll cycle during the photosynthesis. (Source: Jamali-Jaghdani; Illustration of chloroplast: B. Tränkner)

The mechanism of NPQ is not yet completely resolved and the impact of Mg nutrition on the functioning of NPQ is studied only scarcely. Thus, the PhD project of Setareh Jamali Jaghdani aims at understanding the changes in photoprotection and photosynthetic processes under various Mg supplies. Its full title is "Capacity and efficiency of photosynthesis and photoprotective mechanisms under magnesium deficiency in crop plants – linking plant physiology with plant genomic and proteomic reactions".

During the first year of her PhD, she conducted experiments with different Mg concentrations in different crops such as wheat, sunflower and barley in order to identify the minimum Mg supply, which has a direct effect on photosynthesis rate and photosynthetic efficiency. The results were jointly published with IAPN’s Junior Professor Dr. Merle Tränkner in autumn 2019 in the peer reviewed journal Plant Physiology and Biochemistry. 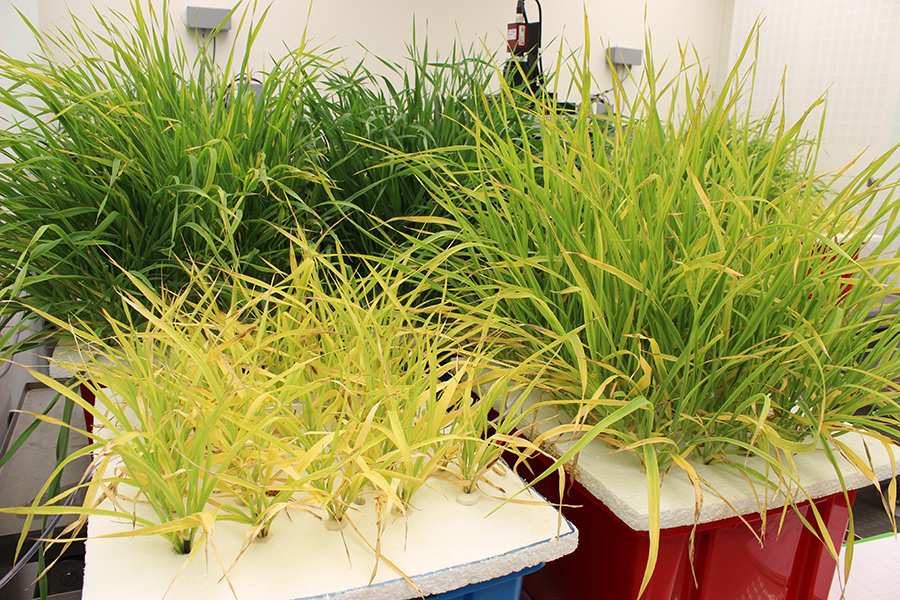 In the second year, she continued with experiments in barley plants which were grown under various Mg treatments. The aim was to assess the photosynthetic efficiency and CO2 assimilation and investigate the level of oxidative stress by analyzing the expression of genes related to enzymes responsible for detoxification of ROS, such as superoxide dismutase (SOD), ascorbate peroxidase (APX) and glutathione reductase (GR) and catalase (CAT). For complementing the measurements of NPQ, she extracted the pigments involved in xanthophyll cycle including violaxanthin and zeaxanthin for their quantification. At the end of 2020, the results were published in the peer reviewed journal Plant Science. The study was co-authored by Merle Tränkner and Professor Dr. Peter Jahns of the Institute of Plant Biochemistry at the Heinrich Heine University Düsseldorf.

The project is funded by K+S Minerals and Agriculture GmbH. 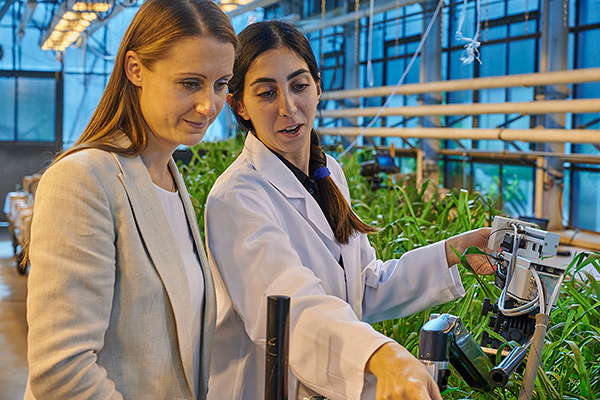 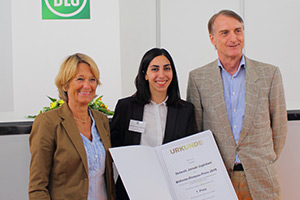 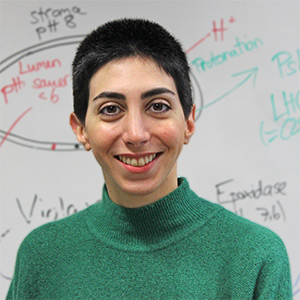 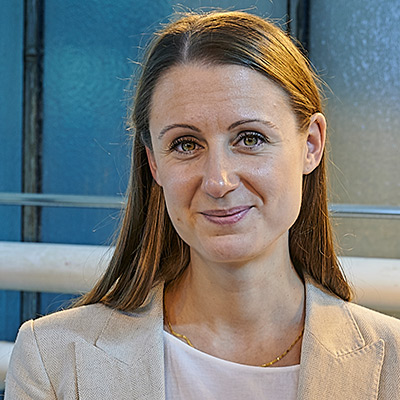 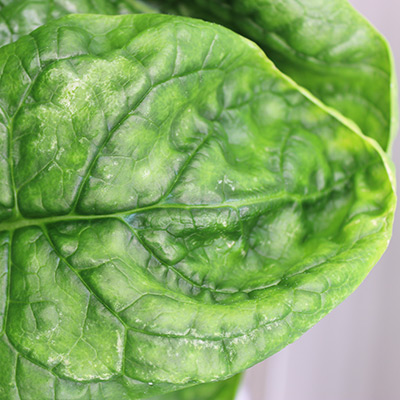 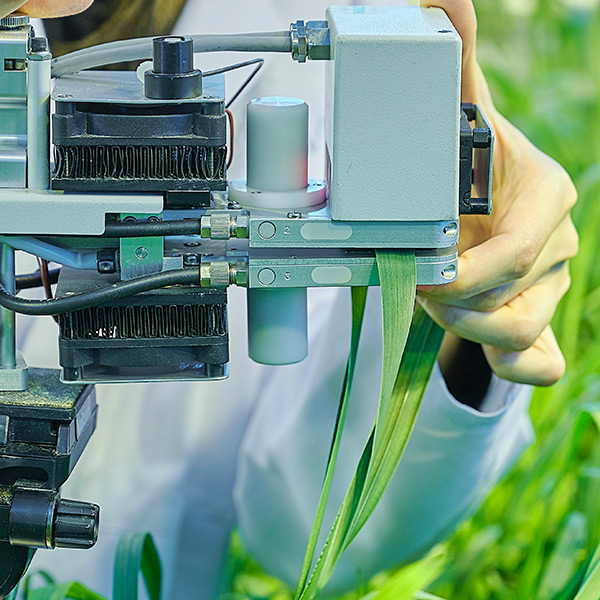